WOW firstly a huge congratulatory mention to the entire organizational Danish team for a massive effort culminating in a very successful European Professional Championships in Fredericia 2018.It was an honor to officiate at this event, my first ever european championship. Four rounds culminated in an explosive final, the enthusiastic Danish standing for the very last jive. I must admit they did take a while to warm up, perhaps the omission of any Danish couple didn’t help, or I just remember competing in Denmark against national icons Alan Tornsberg and Vibeke Toft when the whole hall was filled with national flags and vigorous chanting from the first round .........

Dorin Frecautanu & Marina Sergeeva
So annexing their second European Professional title are the success partnership of Dorin and Marina. Success definitely breeds confidence which they exuded from the very first bar of the first Cha Cha, never a hint of trepidation. This remarkable lady of latin knows her worth and thank goodness so does Dorin, letting her shine reinstating the old cliche “the man being the frame and the lady the picture”. These two are always fully present and totally committed to every nuance during their super rehearsed performance , but this can also appear a trifle predictable. I also noted some strange technical faults creeping in, especially in the samba which I’m sure can be easily eradicated.

Nikita Brovko & Olga Urumova
Finishing second in their second European Championships is quite a successful feat in itself, the on going battle with Nino and Andra falling in their favor on this occasion. Never overly extravert personalties which are grappling with looking “competitive “ whilst maintaining the sound, purist dancing we have come to expect from these two. They didn’t disappoint but also they didn’t excite..... their natural charm endearing but can get swamped by the fierce competitors around them. I would still like to see Nikita using more tone through the legs which could encourage more dynamic rhythmical changes and although Olga’s legs action has improved, there is still further attention needed especially during faster weight changes.

Nino Langella & Andra Vaidelaite
Actually a great showing for these two on the night, I noted improvements on various levels which if they are reading this must be perplexed by my marks. There is no doubting their abilities, or their effervescent personalities and charisma, and in general everything appears coherent on the surface. My doubt starts with the skill factor, as a judge its my job to assess and compare the various latin american skills of a couple against another, with Nino and Andra there are just too many double foot placements, different timings whilst in hold, unnecessary tension throughout the body... For me one wins competitions with the assets one excels in, so for me a rethink of priorities is necessary. You are both so much better dancers than the dancing you are producing.

Pavel Zvychaynyy & Oxana Lebedew
Finishing fourth and finally putting in performances we have been waiting for since these two beautiful, talented dancers partnered up , just goes to show great partnerships take time.
Oxana is back. I know she probably feels she never been away but this is the feline, oiled vamp I remember dancing with a certain Mr Formica , but now with the added bonus of lifes experiences. The dance of the night for me was their Introduction Samba into the final... my little rhythm monster which has remained dormant for some time suddenly sprung to attention, all those intricate, co-ordinated, percussive muscular movements in complete harmony with the partner and music being played ... wow wow wow. Now the problem starts, how to maintain that level throughout an entire competition, also if unfavorable music is playing and hopefully to infuse it to the other dances, but at least we all know its possible, no pressure.

Massimo Arcolin & Laura Zmajkovicova
These two are an enigma to me, capable of superb, highly skilled, authentic Latin American dancing, but never managing to convey their product ‘seriously’ enough to be a contender for higher places. They started the competition in a demure ‘black look’ which I loved as it gave them a seriousness and weight which I think are the two factors which have eluded their performances in the past , then for the final changed into a ‘latino look’ for the final (which was also great) and proceeded to bang out an almost basic samba routine for their introduction dance, only to revert to the original samba routine during the comp. Their talent enabled them to pull off both rather successfully, but the message comes across as indecisive… I would love to know THEIR vision, but at the moment are dancing chameleons, a dancers gift but a competition detriment.

Manuel Frighetto & Daria Sereda
Completing the trio of Italians making the European final, Manuel and Daria put a nononsense more mature performance than of late which is definitely a huge step in the right direction. They manage to make their quite intricate, complexed choreography “flow” thereby always easy on the eye and never offensive. To further enhance their progress, study into expressive energy has to be delved into, how to be excited without looking flippant, some moments Manuel is overly buoyant, the next moment like the lights have gone out… luckily however he always has the attention of this very sensual young lady.

Just a note to all the finalists, if indeed you had all danced the Introduction Samba the same in the competition, I would’ve seriously have had to mark it completely differently, the rhythmical introduction track versus the more lyrical played in the final. I don’t the music should’ve had such a hug effect on your end product, but was amazing to see just how much influence the music had. Maybe you are not practicing to good enough music to be able to create rhythms in the body when the music played does not support this.

Congratulations to all competitors for making our job as adjudicators difficult with the vast array of talent on show during the entire event and thanks to the “team’ for making us feel special. 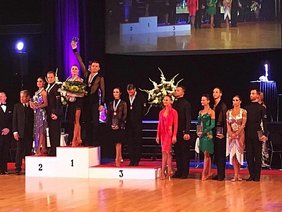